Those in the know will already have guessed: Star WarsTM will soon be breaking out in Opal’s licence portfolio!

A long time ago in a galaxy far, far away… On May 25th 1977, George Lucas launched STAR WARSTM and changed the film world for ever. It was an immediate success. STAR WARSTM is a mythological tale of the struggle between good and evil, in which the Jedi knights confront formidable intergalactic creatures by using the Force.

In December 2015, a new STAR WARSTM era dawned with the release of the 1st film in a new trilogy:  STAR WARSTM, Episode VII: THE FORCE AWAKENS

A new series of films, telling us more about characters and events from the classic saga, will be launched in December 2016 with the release of ROGUE ONE:  A STAR WARSTM STORY.

*Yoda to Luke in The Empire Strikes Back: “Through the Force, things you will see.” 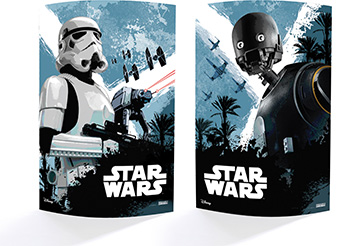 Elliot and Eloïse, our new Little ELEVENPARIS models, have given us a gorgeous set of…

With STAR WARS: THE LAST JEDI, the Skywalker saga continues. The heroes of THE FORCE…

Fashion is not only for parents! The younger ones also claim the right to fashion…